The German company will launch a new advertising campaign in the coming weeks, based on the slogan “Your dream is possible” in order to boost the sales of its vehicles against the current crisis. 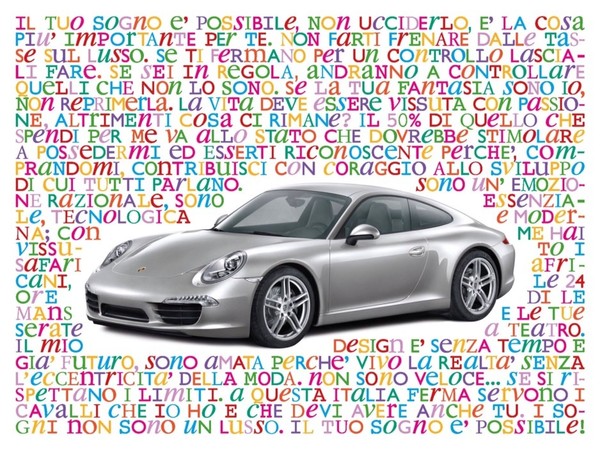 The auto market is in crisis and more expensive vehicles are among those that suffer the most difficult time of the global economy. Porsche wanted to launch a new advertising campaign, signed by the famous photographer Oliviero Toscani with the advertising message “Your dream is possible.” The visual is colored, the text is surrounding it with its meaning challenging the classic silhouette of the Porsche 911.

“We Italians were known to be vital, funny, even a little ‘bullies, said Marcello Mastroianni ‘they did fall in love and used to throw your heart over the obstacle – said Toscani – I gladly responded to the invitation of Porsche because it is a company that creates wonderful cars and the offer to buy them today is to give a boost to the economy, contributing to the development and at the same time, returning to dream.”

The campaign features the sports car as a”rational emotion” and calls the dreamers not to restrain their desires, not to be intimidated by luxury taxes, not to be paralyzed by the roadside. Advertising will be planned in major national newspapers in the next few weeks.

Marbella, a beautiful town in Mediterranean region, is the place where the 2013 Mercedes SL550 Convertible will be tested. The retractable hardtop was packed…