They are different Ferrari models and a pair of Aston Martin cars seized by Spanish police in two workshops near Valencia. The specimens ended up in the crosshairs of law enforcement since they were illegal copies of popular models of the two manufacturers whose logos, as explained by the agents, were reproduced in a rough. 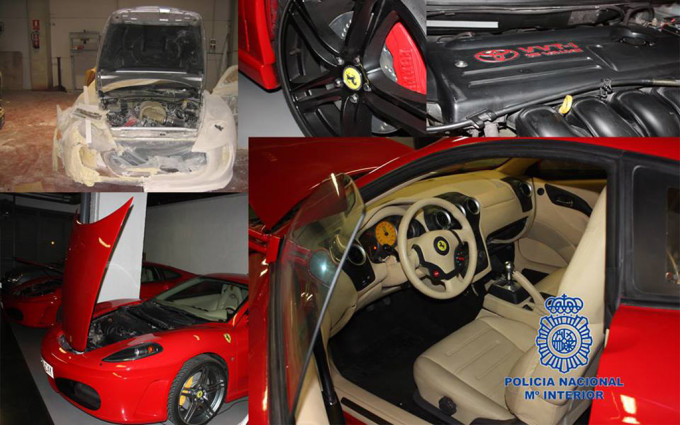 Overall, the police stopped the Iberian eight people, including two and three in Madrid and Valencia. The counterfeiter’s sports cars operated in two clandestine factories to Albalat dels Sorells and Algemesi, location of the Comunidad Valenciana.

The bodywork of the false cars, between some Ferrari F430 and F430, were made ​​of fiber glass, while in place of the original engines were placed units taken from much less expensive models, including some four-cylinder Toyota source.

Logos and names of the cars seized (17 in total) were reproduced directly from counterfeiters, while difficult to counterfeit components were purchased through some English intermediaries by manufacturers themselves, who unknowingly put the pieces available through its network of original parts distribution.

The investigations were initiated following a complaint lodged by the representative of Spain of the House of Maranello. It is therefore understood that the false Ferrari were sold via the Internet at a price of about € 40,000 each and, according to police, at the time of the customers were well aware (and saw the price could not be otherwise … ) that it was a counterfeit product.

Volkswagen has released the first official images related to the redesign of the Touareg, the protagonist of a cosmetic upgrade and content that will…