There’s a great choice of race resorts and circuits these days that allow avid drivers to get the feel for different landscapes around the world whilst in control of powerful, cutting-edge machines. The Circuit Portimao drivers’ track in Portugal and the Ascari Race Resort in southern Spain are two prime examples. Host to the World Superbike Championships, the Portimao Circuit is 4.7km long and was only completed in 2008, and its flowing tarmac rollercoaster of difficult cambers and blind crests is high on the wish-list of every racing devotee. It comes at a price, of course, and at the Spanish Ascari Resort this is hiked up a few big notches, with membership currently at $200,000 although you do get a unique combination of Eau Rouge, Karussell and Corkscrew features all in the one track for your money. 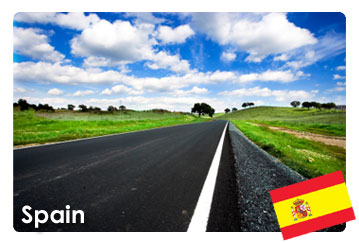 But when you consider the sheer expenses involved, albeit for access to two of the most exclusive drivers’ tracks in the world, along with a few shimmering trimmings no doubt, you may find yourself thinking very understandably that maybe car hire in Spain or Portugal would make a good, and certainly cheaper, alternative. You could spend the cash you save on top restaurants and glitzy accommodation, and generally have a luxury holiday for the same price as being stuck in the one location. No matter how demanding, varied and state-of-the-art, a track is still a track, whereas by hiring a sports car for the week you get to experience the varied landscapes of a whole country and no two days are the same.

Spain is a country steeped in history, with an extraordinarily rich culture which is a blend of Moorish and Christian Gothic, especially noticeable in the southern regions. The whole country is an astonishing mix of this historic depth and more modern features, so you can explore its often gloomy past and vivid landscapes in perfect comfort whilst traversing its thoroughly modern road network. Travelling around Spain in style in a luxury sports car isn’t that much more expensive than opting for a cheaper model, as most hire companies in Spain and elsewhere are forced to lower their prices in such a competitive market to ensure that their entire fleets are used effectively.

The additional expense for hiring something like a luxury sports car for a Spanish road trip comes mainly from the fact that the vehicle costs more for its outright purchase in the first instance and is more expensive to maintain, and the insurance will also, of course, be higher. But even factoring these sorts of considerations in, you’ll still have change left over from a luxury trip across Andalucía or La Mancha compared with what it would have cost you for a few laps at Ascari.

The legacies of Roman, Moorish and Medieval Catholic Spain overlap constantly to create a truly stunning cultural landscape that you could easily spend a lifetime or two exploring and appreciating. But from the vantage point of a powerful sports model like a Jaguar E-type you can get to see a great deal of this fabulous country and still be in pocket, and the same applies for most other locations that make much of their top notch, and top dollar, racing tracks.

David Elliott is a freelance writer who loves to travel, especially in Europe and Turkey. He’s spent most of his adult life in a state of restless excitement but recently decided to settle in North London. He gets away whenever he can to immerse himself in foreign cultures and lap up the history of great cities.

Citroen has launched a new special edition of the compact C1, the Vanity Fair 10. It was designed to celebrate the tenth anniversary of…