The latest 2012 Porsche 911 GT3 RSR is now on the roll and ready to race tracks. This brand new racing vehicle coming from Porsche will be heading to the market with quite a number of modifications. One change is the width which has expanded by up to 48 millimeters. Another is the increase in size of front wheels of up to 30mm. The car is also featuring an aerodynamic concept.  To put this auto to the test, it can be raced around for 24 hours at Le Mans and other similar endurance championships. The price tag is € 498,000 and it is available in different parts of the world. The engine under its hood can produce up to 450 bhp. It is equipped with catalytic converter, flared wheel arches and Michelin race tires. Porsche also equipped the car with anti roll bars in front and back area, ceramic composite brakes and special type of steering wheel. 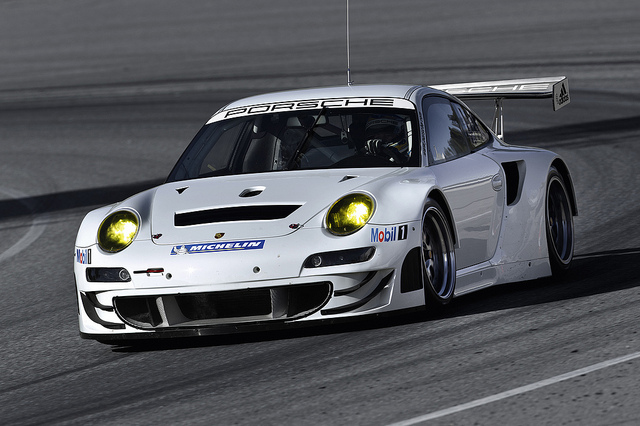 You can control the settings of the car through switches. Upon its released, there are over thousands of units sold. Compared to other previous models, this car is suitable for endurance racing event. This also features 100-litre FT3 fuel tank which is an improvement for safety standards. They also added a race exhaust system that can able to lessen the emissions. The front can accommodate light alloy wheels that measures 9.5Jx18 with 25/64-18. The back tires are also light alloy rims which measures 12Jx18 with 30/68-18. The blade type anti roll bars in front and back can be adjusted in seven different positions that can allow precise set up for the track. This feature is only exclusive for road models of Porsche. The ceramic composite brake can be able to reduce the car weight by about 20 kilograms. The interior of this 2012 Porsche 911 GT3 RSR (997) can cater to all the needs of any driver. You can be able to control the info display that is found on the steering wheel. The height of the steering wheel can also be customized depending on the needs of the driver.

Definitely this 2012 Porsche 911 GT3 RSR (997) can be used for racing anywhere in the world. Another version which is the 911 GT3 Cup is competing in various races and long events. The 911 GT3 RSR is complying with regulations and rules set by racing organizers. This model is very efficient because it is powered by six cylinder boxer engine with four liter capacity. According to the head of Porsche motorsport, they have tested the car on international race track at full speed. The result is exceptional with regards to performance and ease of driving. It can be concluded that this 911 GT3 model is highly competitive.

No doubt about it! The fans are quite thrilled about the new Impreza, at least according to comments appearing in recent posts. What can…