Land Rover has officially completed its very first hybrid expedition, and they averaged more than 36 miles per gallon in the process!

The hybrid expedition, which saw three different Land Rover prototypes travel over 10,000 miles from Solihull in the UK to Mumbai in India, lasted 53 days  and has proved the resilience of Jaguar Land Rover’s next generation power plants. 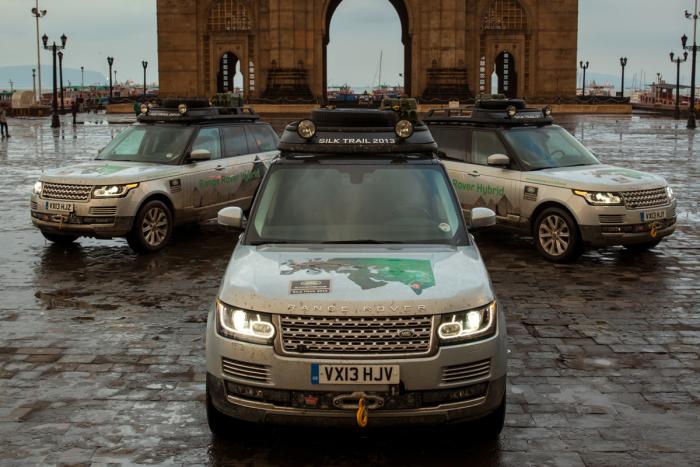 The cars had to endure temperatures that ranged from -10C to 43C, and operate up to 5,500 metres above sea level. The cars followed the Silk Trail, passing through France, Belgium, Germany, Poland, Ukraine, Russia, Kazakhstan, Uzbekistan, Kyrgyzstan, China (including Tibet), Nepal and India.

Peter Richings, Jaguar Land Rover Hybrids and Electrification Director who took part in the final leg from Jaipur to Mumbai commented (Autoexpress): “I think the economy we got was quite remarkable considering the vehicles were heavily laden and the range of conditions they faced. We drove them on high speed autobahns in Germany to extreme off road in the mountains operating up to 5,500 meters above sea level, where oxygen levels are very low.”

The purpose the hybrid expedition was to test how three different types of power plant coped out in the real world. The data from this expedition will be used to calibrate and fine-tune the power plants to ensure their maximum efficiency in the future.

Included in the expedition was a model of Range Rover to go on sale soon – it features the standard 3.0-litre SDV6 engine that produces 215kW/442 lb /ft of torque but is combined with a 35kW/170Nm electric motor to make a combined torque output of 516 lb /ft, which is more than the class-leading V8 supercharged model. It’ll also return a combined fuel consumption of 44.1 mpg, which is very good for a car of its size, and as proved by the expedition, it works in all environments too.

Completing this expedition is great news for Jaguar Land Rover, according to Guiseley Farnell Land Rover, who note that no other car manufacturer is going to these lengths to test the durability of hybrid engines. Not only that, but due to the testing of these cars at an extremely high altitude, Jaguar Land Rover will be able to offer their cars with confidence to markets like China, where the need for a good off roader at high altitudes is strong.

Of course, the cars did have several technical setbacks along the way.

In total, 15 punctures stopped the expedition in its tracks, and four wheels were damaged by deep potholes. In addition, four windscreens were cracked by stones that were thrown up on loose surfaces.

All in all, this is a great achievement for Jaguar Land Rover. It would be interesting to see what a hybrid Evoque could do in those conditions.

In America they are more common in our part of the city car, we’re talking about the pick-up, a sort of off-road dump born…